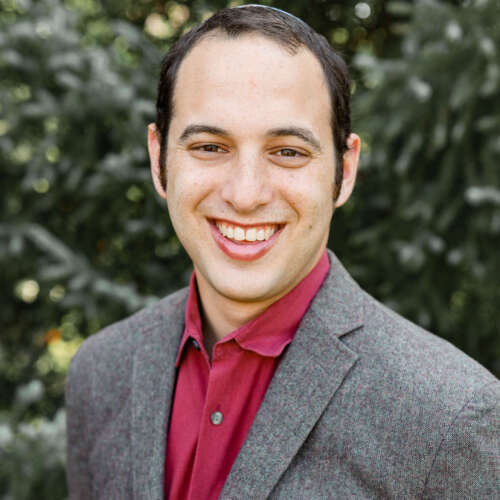 Rabbi Benjamin G. Azriel is the Assistant Rabbi and Educator at Temple Beth Or.

Originally from the northwest suburbs of Chicago, Rabbi Azriel lives in Cincinnati, OH. He is an alum of The Ohio State University. He earned a dual-major in Political Science and Economics with a specialty in American Judicial Politics and Economic Regression Analysis.

After finishing school, Rabbi Azriel worked as a tax accountant and a synagogue Financial Director. Rabbi Azriel grew up in the Reform movement and is a product of Temple Chai in Long Grove, IL. He is an alum of NFTY-EIE (now Heller High), a high school study abroad near Jerusalem. Rabbi also served on the Olin Sang Ruby Union Institute staff for six years in various positions and has staffed multiple trips to Israel for youths and young adults.

After returning from his first year in rabbinical school, Rabbi Azriel was the program director of the Religion Action Center’s Machon Kaplan summer internship program, which placed dozens of college students at internships in non-profit advocacy organizations in Washington D.C. During rabbinical school, Rabbi Azriel worked as a student rabbi at Temple B’nai Israel (Petoskey, MI), B’nai Israel (Parkersburg, WV), and at Hillel at Texas A&M University, University of Texas Hillel (Austin), and Hillel at Miami University (Oxford). Rabbi Azriel was an active member of BBYO’s Jewish Education Consults and traveled around the country working with teens and professionals to bring Jewish programming to life for youth.

Rabbi Azriel lives in Cincinnati with his wife, Rachel, a physician working in Pediatric and Internal medicine. They are lovers of the Chicago Cubs and their dog Wrigley.

Looking Back on Makor

When the Covid-19 Pandemic began, we were wearing masks, celebrating that we had survived an oppressive Persian dictator. It was Purim 2020, and shortly after that, we quickly moved to remote education, distance services, and online programming. Forecasts said that we...

Lighting Up the Atmosphere

Atmosphere creates meaning. When it reaches October, I find myself deep in the crawlspace of my home, digging out the Halloween decorations. Why do Rachel and I decorate for Halloween? I am not sure, but it is fun, and it adds a little pop to our front porch.   This...

We are back in person, and it feels so good!  Makor has started again, and we are so excited to have our students back in our building, filling our classrooms with Jewish education, Hebrew learning, Confirmation conversations, laughter, and joy.   I want to say a few...

I had never been someone to wear a mask. I found masks to be hot, smelly, sticky, just all-around annoying. To avoid a big thing over my face or head, every year when Purim came around, I would always volunteer to be the person who would wear the elaborate costume...